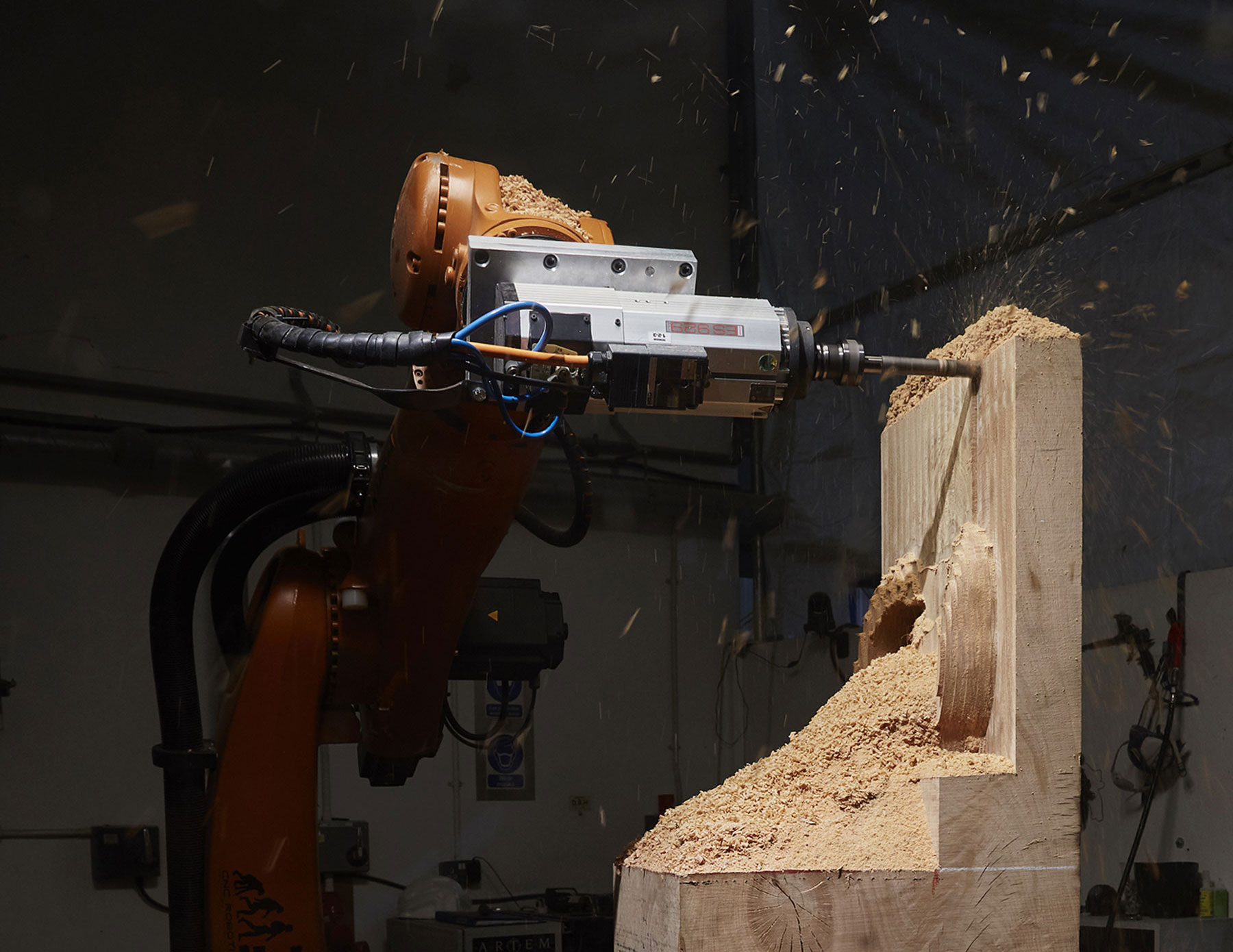 As part of COLLECT 2019, the international art fair for modern craft and design, British furniture designers John Makepeace and Gareth Neal came together for a discussion about the current nature of craftsmanship and technological innovation. It was chaired by Sarah Myerscough, the London gallerist renowned for being one of the first to give contemporary crafted objects a fine art exposure. With great passion and energy she supports emerging and internationally acclaimed artists in their innovative ideas.

John Makepeace, a former trustee of the Victoria & Albert Museum and a recipient of the OBE in1988, has been a wood furniture designer and maker since the 1960s. A founding member of the Crafts Council in the 1970s, he was aware of the need for integrated education specifically for furniture designers and makers that would lead to being able to make a living in the real world. So John set up Parnham College in Dorset in the mid-1980s, which quickly gained an international reputation and to this day has an impact on the landscape of British furniture design.

Like John, Gareth Neal also specialises in wood furniture making since the late 1990s, today his practice is based in East London. What fascinated him from the start is the way digital technology can be utilised in both the design and the making of a piece of furniture. Very early his work received critical acclaim and as a result, has been showcased in major international exhibitions. His bespoke work is sold through international galleries and he has collaborated with various designers, including the late architect Zaha Hadid. For this project, they created a set of digitally manufactured table wear to be shown at the 2014 Design Triennale and the Victoria & Albert Museum.

Both, John and Gareth are progressive and contemporary designers embracing digital technology in their process of making. However, their perspective and approach to making are slightly different.

During the discussion at COLLECT 2019, what they both agree on is that digital technology holds unlimited possibilities for furniture making.

As John explained: “Woodcraft has long been stuck in the old ways of wood processing of the 17th century. Technology today pushes what is possible in woodcraft in unlimited ways. And the enormous changes in technology bring new opportunities to craftspeople. If my imagination takes me to a new process, then I have to use it.”

A good example of this can be seen in one of John’s most recent projects, the Trine Chair series that applies a chair’s essential structure and anthropomorphic qualities for excellent support of the spine.

Each chair is made of its five essential components- three legs, a seat and a back. The backs of the chairs are individually designed and linked to the seat with small, internal steel connectors that were originally developed by NASA scientists to join the wooden blades of wind generators in Hawaii to their metal hubs. Because of this applied material technology, the strong construction of the chair brilliantly juxtaposes the beauty of English oak with light, sculptural forms.

For John, it’s all about integration and enhancement of the best properties in wood, and using digital technology provides huge opportunities to be more connected across industries and disciplines. In construction, for example, a collaboration between craftsmen, scientists, structural engineers and architects can now find new ways to use timber more effective by identifying the properties of timber and keeping the integrity throughout the building process. This in mind John believes that new technologies will open many more possibilities for new disciplines that will lead forward.

Technology as an extension of the craftsman’s hand

The Hack Chair (2018) by Gareth Neal, on the other hand, is an artistic exploration of how digital technology can be perceived as an extension of the craftsman’s hand by combining traditional ways of making with new technology.

Created in 2018, Gareth used a Krüger robotic 6-axis CNC arm that was programmed to hack and carve into a block of green oak. As a result fractures, splits and wood rings were left bare and visible and Gareth completed the chair giving a deeper definition to those ‘imperfections’ carving by hand and scorching the wood.

With its nod to the Georgian style, the result is something new and very exciting; still, the chair neither looks quite digitally made nor hand-made. That is why it raises the question of whether digital manufacturing carries an element of craft within it. And further Gareth urges for an updated definition of modern craftsmanship.

Technology and the art of workmanship

Using something like a CNC machine, Gareth explains, takes time and practice to get right. For him, expertise is based on experience acquired over time but also involves all the failures that come with it.

Developing an understanding of the material and the process obtained through the experience of previous failures and risks is the same for any tool, including digital technology, Gareth reasons.

John agrees with him wholeheartedly. Mistakes should be recognised as part of the creative process. “Experiments can be disastrous, but you still gain something from it. That’s what drives creativity forward.” Both, handcrafted and digital processes require experimentation and gradually become better with experience, knowledge and skill.

About the definition of modern craftsmanship

For Gareth, modern craftsmanship incorporating digital technology should be accepted and valued as such. “We need to think differently about machine-made objects and how amazing they are as an extension of the hand,” he says. “Although we do not necessarily touch the object, that distance from holding the object is still valid.”

As John says: “It is the intimacy with the material that gives you the sense of what you are trying to achieve. The benefit of digital technology is that it allows us to understand the material more fully. For example, the process of how you draw things is hugely significant in furniture making. Using digital technology, we can draw objects in 3D, instead of the classical way in 2D.”

Gareth referred to the paper he wrote ‘The Certainty of Uncertainty, Risk and Uncertainty = Originality’.  It is a response to a book called ‘The Nature and Art of Workmanship’, written in 1968 by David Pye, Professor of Furniture Design at The Royal College of Art from 1964-1974. In his paper, Neal concludes: “The quality of craftsmanship is predetermined by the skill, judgement, dexterity and care which the operative exercises as he works, regardless of the kind of technique or apparatus.”[1]

So if the process and the tools involved in craftsmanship are less decisive than the use of digital technology does not impose a threat to the quality of craftsmanship itself.

How to value a digitally manufactured object?

In her final question, Sarah Myerscough wanted to know how technology has influenced the perceived value of an object. For Gareth, using digital technology is often thought of in a negative light but he turns this on its head. “The time and cost of digital manufacturing is expensive and consequently makes the object more expensive.”

“The value of an object is determined by the intimacy with the material, the process and the concept. This will not change, regardless of time and progress. Indeed, it will remain the cultural foundation of all crafts.” John pointed out. Craftsmanship will remain the same regardless of technological advances, same as that technology does not pose a thread to a craft’s cultural heritage, both belief.

It was perhaps Gareth who got to the heart of it when he said: “In order to be successful in the industry, we need to be progressive and we need to embrace the technology that is available to us.” New technology is not only available to us, but it presents endless possibilities to set ambitious goals and new standards.

He concluded that there should not be a competition between hand-made and machine-made, rather both should be solely seen as a celebration of the tools and the craftsman’s achievement.

[1] The abstract ‘The Certainty of Uncertainty, Risk and Uncertainty = Originality’ written by Gareth Neal can be downloaded here

0 comments on “TECHNOLOGY IN CONTEMPORARY CRAFT”